I was thinking this morning about motivators for photography, or the creative process in general. What is the allure? I guess, for starters, you don’t have much choice: one is driven. It isn’t really rational. There is something that gets you out the door – in this case with a camera – and once you’re out wonder takes over. We’re all explorers by nature and wonder is a big motivator. Humility is another. A friend of mine has spiritual values and years ago he was married to a woman who thought anything spiritual was silly, hokus pokus. So he took her to see the Grand Canyon and bingo: she got it. He could see the change in her countenance and sensed a transformation in her whole being. She was moved and clearly felt awe (brother of wonder and humility). My friend was excited. His wife could now be a real comrade. Unfortunately it didn’t last. For others that feeling comes up all the time. You see something beautiful and you can barely contain yourself. What should you do? If you are a photographer you take a picture.

The above photograph was made during the days when I had a still life studio. Landscapes were my art and shooting them got me out of the studio and into nature. The process was an adventure and I love the places that took me. Part of the experience was the clothing I collected and used for all kinds of weather and, of course, the camera gear. The picture above was taken with a 4×5 Special Deardorf camera – really a 5×7 with a reducing back, a heavy Gitzo tripod and not so light tripod head, a bag full of lenses and, of course, film holders. I had just arrived at our summer house in Craryville, NY with a car full of people. When I drove up the driveway and saw this scene I immediately headed for the trunk of the car to get my camera. The view of the hay bales blew my mind. I thought it was not only beautiful, but it felt like I was looking through a window into America’s past. Twice gallery owners wanted me to make 10 prints and retire the negative so they could sell the prints, but I hardly knew those people and so I said no.

The image below shows where things have led me. I took it with a 35mm digital camera and it was originally a vertical. Someone said they liked the image, but needed it horizontal. So I changed it, because I liked it horizontal too… I’m willing to experiment more now.

I should say a little bit more about the image below. I saw the reflection on the building from several blocks away and gradually wended my way to the street below. The building was on the next street so I was looking at the back of the building. It wasn’t close and I had to keep moving to get the exact reflection I wanted. A tripod would have helped, but I generally don’t use one when I shoot in a city. There are too many people and I don’t feel safe. So I shot several exposures and when I got home the image I saw on my computer didn’t really look anything like this. I love a beautiful, straight photograph, like the one above, but lately I like to experiment and play when I can. My Architectural Abstracts are the perfect venue for that, so I pushed the colors as far as I could and then made proofs to make sure what I had would also print. 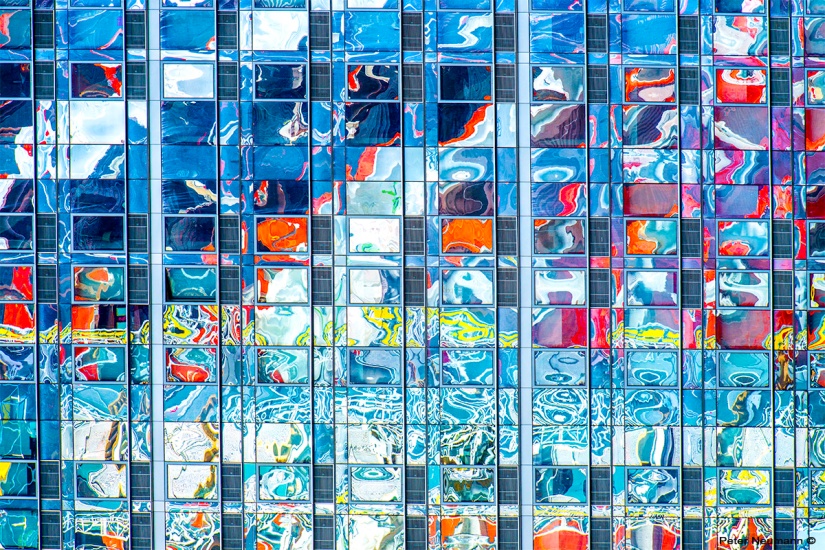